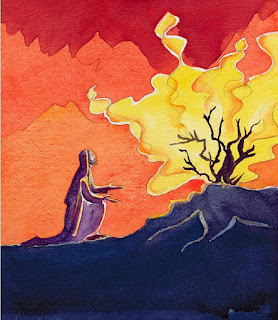 In the movie Bruce Almighty, actor Jim Carrey plays Bruce, an angry, down-on-his-luck television newsman.  After tiring of the newsman's complaints, God offers him the chance to take over the Almighty's job.  But something totally unexpected happened after the movie hit the theaters.  The movie showed God's phone number on Bruce’s pager, and although movies usually use a phony telephone number, this time the seven-digit number shown in the movie was real for certain area codes.  So soon after all over the country, people started dialing their area code and then that number, leading to some fascinating conversations.

In , Cathy Romano, president of a company that manages the practices of doctors, was getting as many as 40 calls a day from Bruce Almighty watchers.  One day she decided to play along. "Hello, this is God," she answered on a whim.  The woman caller gushed, "I can't believe it; it's God, and it's a woman!"  Question – does God speak to us or is that idea something make-believe that we only see in the movies?

From the time that I was a child in Sunday school I have enjoyed the story of Moses and the burning bush.  It’s a memorable story that captures the imagination of children, but at the same time conveys an important message for adults.

Moses is tending sheep for his father-in-law Jethro in the wilderness and comes to .   Suddenly a bush erupts into a blaze in front of him.  Moses sees that the bush is burning, but is not consumed.  He thinks:  “Check this out, how weird, this bush is burning, but it’s not burned up” or something like that.  Moses doesn’t have a clue that it’s a sign from God.  He misses it completely.  It’s more of a curiosity of nature, an unexpected distraction from working in the heat of the day.   But burning bushes are important.  They symbolize God’s modes of revelation – of reaching out to us, guiding us, directing us and calling us.

I think this story says something about people in the Bible.  It reminds us that though we often think the people of the Bible were so much more spiritual and holy than us, we discover that it’s not true.  They were human and fallible like we are.  When Moses saw the burning bush, do you think he immediately thought: “Verily yonder a bush burneth, God must want to speaketh to me.”  Not at all.

God first had to get Moses’s attention.  God used a burning bush.  God might use a different means today. A burning bush would quickly bring the Fire Department.  Like in Moses day God has to do something in our day to first get our attention.  Why?   We can get so caught up in things, so wrapped up, so distracted, so immersed, that we aren’t in a frame of mind to hear God speaking or see God guiding us.

Then God’s voice sounds forth from the Bush.   “Moses, Moses.”  This gets his undivided attention.   Moses hides his face because he is afraid to look directly at God.

God says to Moses – “I have seen the misery of my people who are in , I have heard their cries and have come down to deliver them from slavery and bring them to the promised land.”   The oppression of the Israelites has moved God’s heart.  God’s words shock him:  “Come, I will send you to Pharaoh to bring my people the Israelites, out of .”  God doesn’t say this is your mission if you should choose to accept it, God simply says I will send you on this mission.  Does Moses reply:  “God Almighty, maker of heaven and earth, on ruler of the universe, You have selected the right man for the job, I’m ready to go.”  Does he say, “God I couldn’t think of anyone better suited for such a mission?”   No, quite the contrary.

And then follows a series of classic excuses.  “But God, who am I that I should go to Pharaoh and bring the Israelites out of ?”  I'm a nobody.  When we say to God "I'm a nobody," God's response is always "I know."  God is not looking for extraordinary people; God is looking for ordinary people who will trust an extraordinary God.  Does God leave Moses hanging?  No God says: “Moses I will be with you, I will go with you.”

“But God, If I come to the Israelites and say, The God of your ancestors has sent me to you, and they ask me, What is his name, what shall I say?   I don't know what to say.”   What does God say to Moses?  “Don’t worry, I’ll tell you what to say."

“But God, what if they say:  “The Lord didn’t appear to you!  What if they don't believe me or listen to me?”  God's answers: "It's not your job Moses.  Your job is not to try to convince someone or twist their arm, or fix everything or solve the problem or have all the answers, your job is only to be obedient to me,  to obey my call, the rest is my job.”

“But God, I’ve never been eloquent, neither in the past nor even now, I am slow of speech and slow of tongue.   I'm not good enough. I’m not a good public speaker.”  God's response to that is "Who made you?  I know you better than you know yourself, I know what you’re capable of.  I will be there with you.”

David Ring, an evangelist with cerebral palsy, says "I can't even pronounce the name of the Lord Jesus, but I'm going to brag about Jesus until the day I die, so what's your excuse?"

Now just when you think Moses has run out of excuses and that God has convinced him, he turns to that age old fallback position “Please send someone else.”  And God says: “Nope, I’m sending you.”   Now as we know, after all was said and done, Moses ultimately obeyed God.  But God also heard Moses, and told Moses to recruit Aaron, Moses’ brother, to assist him in this great mission of deliverance.

I think of times when out of the blue, I have thought of someone and decided to call or contact them and they say:  “You know I was thinking about you, so glad you called, or you know I have been dealing with a difficult time in my life, thanks for calling.”  Was that a call from God?  Was God prompting me?  I believe it was.

To have a personal relationship with God means you must be open to the possibility that the Spirit of God will prompt you, guide you, direct you, call you.   True, we are not infallible about whether or not we are hearing from God.   Can I prove that thought was from God?  No.  So it helps to understand God’s will is always in sync with the truths and principles that we know from Scripture. That God’s promptings, God’s call, is always in line with the scripture, in line with the gifts and abilities God has blessed us with, in line with a call to service, in line with a call to repentance and confession.    Often the Spirit will prompt us with thoughts: a thought to write somebody, to serve somebody, to get involved, to make a commitment, to do something, to confront somebody.

When those thoughts come, the point is to listen, to pay attention, and to obey God’s prompting.  I recall the story of Christian author, political and social critic Os Guinness.  He was convinced early on in his life, that now that he was a Christian, he needed to meet everyone’s expectations by becoming a pastor.   So, urged on by his spiritual mentors, he became a pastor and worked for a well-known church, but he was miserable.  He was extremely unhappy.

One day God opened his mind through a random encounter at a gas station.  He had enjoyed a conversation with the mechanic at the station.  He writes:  “As I turned on the key to start the car, a thought suddenly hit me with the force of an avalanche.  Ten minutes of conversation with a friendly man at a gas station and I knew once and for all I was not cut out to work in the church as a pastor.  Through that conversation God released me from what I was not supposed to do, and I found the freedom to pursue God's true calling for my life.”  Was God speaking to Os through this mechanic?

You never know in what circumstances you might hear the call from God.   God called Millard Fuller during a time of crisis in his marriage.  At 29 years of age, Millard walked away from his life as a wealthy and successful businessman to devote himself to the poor, eventually starting Habitat for Humanity in 1976, which spread what he called “the theology of the hammer” by building more than 300,000 homes worldwide.  He died in 2009 at 74.

Mr. Fuller’s life changed completely after his wife Linda, whom he had married in 1959, threatened to leave him.  She was frustrated that her busy husband was never around, and their marriage and family was falling apart.  They spent time soul-searching. After a time of prayer in a motel room, they heard God’s call to totally change their life.  The two agreed to start their life anew on Christian principles.  Eschewing material things was the first step. Gone were the speedboat, the lakeside cabin, and the fancy cars.  Today, more than a million people in 100 countries live in the homes built by Habitat for Humanity.  All because God called out to them in the midst of a marital crisis and both Millard and Linda listened and obeyed the call.

It’s strange.  The Israelites were suffering under the yoke of slavery.  And Moses turned out to be God’s answer to that situation.  Yes, know this, in certain situations you are God’s answer.  No not someone else, you are.  God is calling you to a task or mission. God wants to use you to accomplish his purpose.  Yes, you may initially come up with excuses like Moses, but also like Moses, trust that God will be with you in that call.  God will always grant you the grace, power and guidance to accomplish what God sends you to do.

I close with a story by Garrison Keillor titled - Your Forgiven Already.  "Larry the Sad Boy ... was saved 12 times in the Lutheran church, an all-time record.  In nearly 10 years he threw himself weeping and contrite on God's throne of grace on 12 separate occasions--and this in a Lutheran church that wasn't evangelical, had no altar call, no organist playing "Just as I Am Without One Plea" while a choir hummed and a guy with shiny hair took hold of your heartstrings and played you like a cheap guitar. This is the Lutheran church, not a bunch of hillbillies. These are Scandinavians, and they repent in the same way that they sin: discreetly, tastefully, at the proper time. ...

Twelve times!  Even the fundamentalists got tired of him. ... God did not mean for us to feel guilt all our lives. There comes a point when you should dry your tears and join the building committee or start grappling with the problems of the church furnace and ... make church coffee and be of use to God."   Yes, pay attention.  You never know when God might speak in a burning bush to you.  Amen!

PB Presbyterian Church
San Diego, California, United States
We here at Pacific Beach Presbyterian Church are a family of Christians dedicated to sharing the word of God with our neighbors. Our vision is: People Bringing People to Christ. We have a single Sunday morning worship service at 10:00am, and our 7:00pm Roots Young Adult Service.